The Coronation of MY King

Do you know how often times when you meet a person who’s not from your way, you get just a little curious. And when you (if you ever) meet someone from out of the country, they’re practically a celebrity.

But I made a friend here on campus. Her name is Lucy. And Lucy is from England. So aside from being thrilled about listening to her talk just so I can hear her accent, I was curious. Do you really have “tea time”? And do you really, honestly, TRULY eat crumpets?? And what’s it like living under the authority of a king or queen? (Because I’ve never experienced that before). When I first met Lucy, I had a lot of questions about England. How does the royal power go? And she proceded to tell me about Dukes and Duchesses and Princes, and the like. You know, we live so far, and having never experienced anything like a coronation, I almost felt like Kings and Queens only existed in fairy tales.

Lucy’s description of the coronation of a King was very intriguing. She described how the priest (probably the Archbishop of Canterbury, AGAIN, only another fairy tale to me) would crown the prince (or in this time, the becoming Queen) with a golden crown. He would put a scepter in his hand as a sign of ruling power. He would clothe him in a royal robe that would trail the floor. And as any royalty would walk the streets, people would lie prostrate in the ground as they passed. I was quite amused and interested. I hung on every word Lucy said. Like I said, these things seemed HIGHLY incredible. It was hard to focus my mind on the actual REALITY of these events. I had only thought they happened in the Cinderella storybooks. Her interpretation of a royal coronation made me realize that the only thing remotely CLOSE to a coronation is an inauguration. And even that doesn’t come close to the royal ceremonies of welcoming new rulers.

But as I listened to Lucy tell me all about the British ruling ceremonies, I thought, “I may not ever get to experience a royal coronation, and I haven’t so far experienced a Presidential Inauguration except for on T.V., but this is much like Christ. He was a King.” But then it hit me. Although Christ was and STILL IS King, His coronation was NO WHERE NEAR that of what one would expect of royalty.

See when Christ was crowned King, He was crowned not with a gold-encrusted crown with precious jewels. Instead, He was given a crown of thorns. And rather than the crown being set on His head reverently, the crown of thorns was jammed into His head. Causing blood to flow.

And Christ wasn’t given a scepter as a sign of His authority. No. By no means. He was given a cross to carry. The cross upon which he would be hung. And when He walked through the streets on His way to Golgatha, the people did not bow to Him and worship and respect Him. NO! They sneered and mocked Him.

Christ did not have servants to do His bidding as He was going to die for me and for you. Instead, He was guarded with soldiers. Soldiers who cast lots for the very clothes He wore. And beside Him was not friends and counselors. Instead, He hung beside two criminals. Instead of earthly praises, He was brutally whipped with a cat-of-nine-tails and spat upon. And if that was not enough, aside from all that He did for us, by taking on our sin and shame FOR US, He cried out, “My God, my God, why have you forsaken me?” (Matthew 27:46) 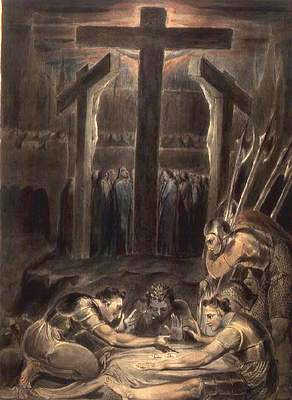 That was what MY King did for ME. That’s how much He loved ME and YOU. And if that’s not the best reason to give thanks to Him, I don’t know what is. Thanksgiving is so centered around food most times. And occassionally we might stop to think of the pilgrims and the Founding Fathers. Okay that’s all good an great, but what about our Heavenly Father? What about our King, the Christ? How much do we think of Him being a King in that way? The battered, beatened, bruised King.

It’s not always pretty or easy and everything’s not to be sugar-coated and frosted. And no, I wasn’t there. You weren’t there. But because it was OUR sins that He took on, we were there in spirit. Isaiah 53:5 says, “But He was pierced for our transgressions, He was crushed for our iniquities; the punishment that brough US peace was upon Him, and by HIS WOUNDS, WE are healed.”

I’ve known the story of Jesus’ crucifixion and I’ve heard it told and I’ve read it over and over, but it did not cause me to be so moved and thankful as it did when I read it over yesterday. The comparison between Lucy’s pretty little fairy-tale land coronation and the throning that Christ was given made me speechless. A very good reason indeed to be thankful this year.

Where Being A Witness Meets Chic Sophistication! Where Every Word Has Profound Meaning. It's all us...ALL REAL! B & F.
View all posts by boldandfab →
This entry was posted in Mondays with Claire and tagged archbishop, bold and fabulous, boldandfab, christ, christian, claire brown, coronation, england, God, Jesus, King, order, thanksgiving. Bookmark the permalink.

2 Responses to The Coronation of MY King