Posted on February 1, 2011 by boldandfab 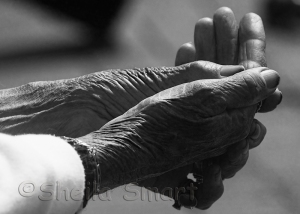 I’m sitting on the train with two hours to spare and here I am typing to my B&F family. I’m beginning to understand how therapeutic this is for me. I know, I know… this isn’t about me but I’ve been a writer all my life. It wasn’t until July 2010 that I began to make it public. Before then, I considered it hobby… the B&F family made it a mission… and today I’m adding therapy to the mix. Today’s blog is a bit different so I hope you guys don’t mind a little story telling. I promise there’s a point at the end.

She would have stood 5”4 if it wasn’t for the hunch in her back. She walked with her eyes pierced to the ground carefully choosing each step. Her trench coat hung just above her ankles, showing just peaks of her flesh tone stockings, shuffling in her orthopedic shoes with the thick soles. She has her purse clutched under arm, a knapsack wrapped around her shoulder, and an umbrella in hand. Me? I was sitting behind the wheel of my old Honda Civic on a one-way street stuck in a line of unspeakable traffic. Anyone who knows me, knows the frustration that was brewing. After a long day on the job, the last thing anyone wants to deal with is a delay in getting home. I gazed over to see an elderly woman who looked to be in her 80s shuffling past my car. She was moving very slow considering the icy rain that was beginning to fall. I sat for a moment wondering who her family could be? Where was she going? And why was she out at such a late hour alone? I was hesitant to extend a ride to a stranger… what would she think? I decided to go with my instinct and offered her a ride. To my surprise she accepted. I only took her about a block to the Metro Access Bus because she wouldn’t accept my offer to take her home, but in that short time she made a lasting impression on me. We would have just two more chance meetings in which I would extend my contact information if she ever wanted a ride or needed assistance in any way… I wouldn’t hear from her again. I’m not sure of the connection I had with her… maybe it was that I imagined my 93-year-old grandmother alone on the street. Maybe I worried about someone trying to harm her; whatever the case, she always brought me a bit of sadness when I thought of her.

It would be a year we last crossed paths…until I passed her on my ride home yesterday evening. This time I was moving too fast to stop and she was walking in the opposite direction. I thought about making a U-turn but decided against it. For some reason, I didn’t feel the same sadness. Instead, I saw her as symbol of strength. Is it difficult for me to imagine her in the dark, cold, walking the streets alone to wherever her destination? Of course. Would I like to chauffeur her around to make life easier for her? Absolutely. But this time I stopped and thought about what she preferred. She could very well enjoy the independence. She may see it a privilege to be her age and still mobile. As hard as it is for me to fathom my grandmother in the same predicament, Elizabeth’s story doesn’t have to be sad at all. She represents the undeniable strength of a woman and how sometimes in order to get where you want to go you have to go it alone.

You just never know who’s watching you and what you may represent to them. Elizabeth and I have only had a handful of interactions but she has made a lasting impact. Yesterday, I was having a difficult day. So much is going on that my mind gets cluttered and sometimes I think it would be so much easier if I just quit. We go through things in life that can really get us down. People mistreat you and take advantage of you… sudden deaths of friends and loved ones… stress over finances or loss of jobs… but we can’t give up. We were placed here for a reason and your journey isn’t over until God says so. If we want to live out our lives to the fullest, we must push through every adversity or setback. Elizabeth was just going about her day trying to get from point A to point B. Never would she imagine that her journey would give me the encouragement I needed to get through my journey. Elizabeth gave me a boost to my spirit and a renewed energy to press through my situation. One day soon, I hope to be able to thank her.

I hope my little story helps to remind you that your life is not all about you. Someone you’ve never met is watching you or has watched you. What impact has your life made on someone else? Be the best you that you can be… someone is depending on you!

Where Being A Witness Meets Chic Sophistication! Where Every Word Has Profound Meaning. It's all us...ALL REAL! B & F.
View all posts by boldandfab →
This entry was posted in Tuesdays with Bianca and tagged bianca ashton, bold and fabulous, boldandfab, chances, elizabeth, God, inspiration, inspires, life, Love, walk. Bookmark the permalink.