Well the day starts out rather bleak. The sun’s not shining. There’s a lot of chaos and confusion amongst my friends. A lot of what seems to me to be, just pure total DRAMA. And I found myself caught right up in the middle of it. You know like how when you have good friends and then something happens and people want to split up? That’s where I found myself today after CUW (my morning class). I got one friend saying one thing, another saying another and my opinion buried deep down in there somewhere, hiding from the surface. It’s those moments when you’re sorta forced to say whose side you’re on.

I hate those times. I just wanted to stay out of it. So as much as I could, I played peacemaker. Well, now at least they’re all calm. But that’s fine. The rifts will work themselves out. But I didn’t want to be exposed to any of that from the get-go. And in the meantime, while I go from class to class, she’s texting me this. He’s telling me that.

….Is any of it really all that big a deal anyway?? I had a Charlie Brown moment: “Good grief.” But then I stepped into the lady’s room in the science building after anatomy lab and someone had posted little sticky notes around the bathroom, on the doors, on the mirrors, underneath the paper towel dispenser! I had heard about  these sticky notes. Several students told me they were in the library bathrooms, and pretty much everywhere else too. But this was the first time I had seen this. And it said, “ALWAYS REMEMBER: ‘You are BEAUTIFULLY and WONDERFULLY made…’ =)” Just like that. Smiley face and all.

It made me stop and think. I was stunned actually. In the middle of all the chaos of the days’ classes (and on a Monday, mind you, as if Monday’s aren’t already days I wish would end quickly) and all the junk and mess my friends kept filling up my inbox with, God thought enough to have someone be there EXACTLY when I needed a little reminder. As one of the hostesses on one of the HGTV shows would say, “How Divine!”

Then everything else started to flood my mind. Not only am I still unique and special, regardless of which friend I may have or which one I might lose, I have Someone who will most certainly NEVER go anywhere!

Romans 8:35-38 say, “Who shall separate us from the love of Christ? Shall tribulation, or distress, or persecution, or famine, or nakedness, or danger, or sword? As it is written, ‘For your sake we are being killed all the day long; we are regarded as sheep to be slaughtered.’ No, in all these things we are MORE THAN CONQUERORS through him who loved us. For I am Sure that neither death nor life, nor angels nor rulers, nor things present nor things to come, nor powers, nor height nor depth, nor ANYTHING ELSE in all creation, will be able to separate us from the love of God in Christ Jesus our Lord.”

I know that as young people (and especially as teens when you were one) friends meant a lot to you. They mean a lot to me too. But sometimes, you just gotta stand back and look at some stuff. See because from where I stand, the friends I have didn’t get me here. They won’t get me to graduation! They won’t have my job, make my living or provide for me. Friends are just that. They’re there for moral support, Godly advice and a companion to eat with, you know. But it’s not gonna be about the friends I had when I was here. It’s gonna be all about who I knew MOST. And that’s Christ. If there’s one thing I never realized so thoroughly as I do now, it’s this: “A man of many companions may come to ruin, but there is a friend who sticks closer than a brother..” (Prov. 18:24) When I learned to see things as how they relate to my relationship with my FATHER, I found the situation a lot more easier to deal with. No matter what PEOPLE say or do or think, I have a solid, strong relationship with my Heavenly Father, so REGARDLESS of who wants to talk to me, who wants to study together, who wants to have lunch!…I’ll never be alone.

Giving up friends is scary. You don’t wanna be the outcast. You don’t wanna end up lonely and secluded. But God opened my eyes in that bathroom today. I WON’T be any of those things because I have HIM! (Thank you, Lord!!) And part of being a Christian being able to make sacrifices, right? I have never been so pushed away from the human race as I was today. *sigh* But that’s a good thing because it only pushed me closer to God.

Friends can help, or they can hinder. And friends that constantly hinder or pull you away from God aren’t really even friends at all. It’s a hard truth to accept, but hey, No one ever said life was easy anyway. Jesus just taught us that by following in His footsteps, listening and loving Him, it would be worth it.

So while I step onwards, I’ll just keep that “worth it” part in mind. As my Chemistry instructor told me, “Don’t take your eye off the goal. Just find another way to get to the goal.” The goal is to live this one life to the FULLEST potential by serving the King and causing the hearts of others around me to wanna do the same. The goal is not being conformed to the world, because they WILL try to change me. The goal is to be the best ME that only I can be and represent Christ to the absolute best of my abilities. And I learn more and more about how to reach that goal each day that I live. Today, I didn’t learn that I couldn’t be friends with everybody. No, I knew that already. And I didn’t learn that THAT fact is okay. I knew that too! I learned that I’ll be just fine accepting that fact because “GREATER IS HE THAT IS IN ME, THAN HE THAT IS IN THE WORLD!” (1 John 4:4) 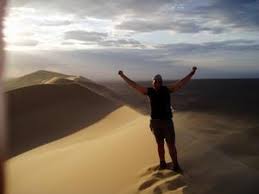 Where Being A Witness Meets Chic Sophistication! Where Every Word Has Profound Meaning. It's all us...ALL REAL! B & F.
View all posts by boldandfab →
This entry was posted in Mondays with Claire and tagged bold and fabulous, boldandfab, christianity, claire brown, God, Jesus, joy, Love, mediator, Peace, peacemaker, Spirituality. Bookmark the permalink.