Am I Smarter Than My Father?

When I was a little girl, I thought I could run faster than my father. After all, I’m younger. I thought I was smarter than my father. We always had the same dumb conversation. “What did you learn today, Celine? …About Jesus/Jehovah.” He never dug any deeper than that. As I got older we rarely had any meaningful interaction. I wanted to do things my own way – win or lose; pass or fail.  So when I left home, he sent me off with, “You’re grown. I did my best. Hopefully the world won’t chew you up and spit you out.”

So I went through life bitter and complaining about not being covered, not being protected, and not being emotionally supported by my dad.  I blamed my father’s failure to protect me for why I was being used and abused in my relationships.  “They think I don’t have a father.”  Well, who was running around acting like a fatherless child? ME.

Then I started looking in the mirror. You see, I never thought I had the, I don’t need a man attitude, the Miss Independent spirit.  Then who I saw in the mirror, was a rude awakening.  My mirror said, ‘So you THINK you’re smart. Sure you KNOW some things.  You’ve always got your head in a book. You’re always learning STUFF, but what do you UNDERSTAND?’  You see, I read 2 Timothy 3:6-7 – Some of these men go into homes and mislead weak-minded women who are burdened with sins and led by all kinds of desires. These women are always studying but are never able to recognize the truth. (NLV)  Wow! That was SO NOT who I wanted to be. 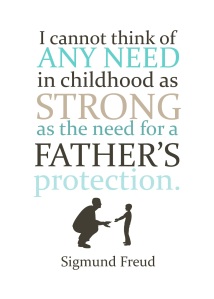 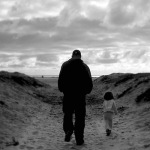 Not only had I been acting like I didn’t need a man, by acting like I didn’t need my father… while blaming him for not being who I thought a father should be; I’d rationalized that my daughter didn’t need a father either, while crying inside as she longed for a relationship with hers. If that doesn’t look and sound like crazy! I had to look at my part in my relationship with my first love – the man God gave to cover me; my dad.

Over the years, I’ve come across people who know my dad.  They always speak highly of him as one of the few men they’ve met that they respect. So what did I miss? Did I ask questions? Did I listen to what he told me? Did I seek him for his perspective when I needed him? Did I appreciate what he could give me? After all, he’d seen some things, been some places, knew something about life.  I have to make peace with that, not only forgiving him for not covering me, but forgiving myself for not allowing him to.

My biological father may have sent me off with his blessing, but now I’ve been adopted. I won’t blow it this time. Romans 8:15 says, …The Spirit you have received adopts you and welcomes you into God’s own family. That’s why we call out to Him, “Abba! Father!” as we would address a loving daddy.” (The Voice)  So now that I have been adopted by my Heavenly Father, I’ll allow Him to cover me.  I’ll ask questions. I’ll listen. I’ll seek his advice and perspective when I have issues.  After all, He’s seen everything, He’s been everywhere; He knows it all.

No! I’m not smarter than my father. So just like Job, I have not turned away from the words of His lips. I have stored up the words of His mouth. They are worth more to me than the food I need. Job 23:12 (NLV)

I share all this for those who are struggling to have healthy relationships.  Your story may not be the same as mine, but I encourage you to go back to your first love. Whatever that relationship looked like, examine it and make peace with their part and YOUR part in what happened. Ask God to help you see it through His eyes. Start to heal, so you can be healthy and whole for your current and future relationships. Father Knows Best!

Where Being A Witness Meets Chic Sophistication! Where Every Word Has Profound Meaning. It's all us...ALL REAL! B & F.
View all posts by boldandfab →
This entry was posted in Sunday Brunch and tagged bitterness, Celine Parker, father daughter relationships, Forgiveness, healing, pride, protection. Bookmark the permalink.

16 Responses to Am I Smarter Than My Father?