Making FaithPrints: Why Moral Mondays Is Every Activist’s Calling

This past Monday, in Atlanta, GA, 39 people were arrested for various acts of civil disobedience.  In a movement called “Moral Mondays,” which began in North Carolina in 2013, everyday citizens have formed coalitions in several states, protesting against policies that impact the middle class and the working poor. In Georgia, with a chant of “Medicaid expansion now!” persons of all backgrounds responded to the state’s failure to expand Medicaid under the Affordable Care Act (also, incorrectly called “Obamacare”)–leaving an estimated 650,000 people without access to healthcare.

Among those arrested was Rev. Raphael Warnock of Ebenezer Baptist Church, who led a group of faith leaders to the Governor’s Office.  If the church sounds familiar, it should: it is the church where both Martin Luther King Sr. and Jr. served as pastors.  His reasoning as to why he was participating in an act that could lead to jail is pretty much the point of my post today:

“We are here today on a mission that is a matter of life and death.  We cannot be silent because silence is consent, silence is agreement with the status quo, silence is unconscionable capitulation to the political games that are being played in this Capitol,”  Rev. Warnock.

Not discouraged by the shame of imprisonment–however temporary–Rev. Warnock, like his predecessor Dr. King, used this opportunity to be an example.  He served as an example to his congregation, to his fellow neighbors in Georgia, and to the nation about how to effectively (key word) protest in an unjust society.  Case in point: I learned about his arrest while watching my daily portion of “The Rachel Maddow Show,” and my heart was elated that what could have been just a local occurrence was now a national story.  We are told that pursuing Christ–who stood for justice–would result in persecution.  Yet, I am so encouraged that there are some leaders of faith that not only hide behind the cross…but actually pick it up.

What I love about the concept of “Moral Mondays” is that not only does it invite all persons who seek justice to unite and speak up, but it is special for another distinct reason: it allows for the right focus and judgment of followers of Christ.  You see, Rev. Warnock is not unique.  There are plenty of unsung fighters leaving “faith prints” everyday.  Whether they announce it or not, it is a “Jesus would not leave THIS table unturned” mentality that motivates many of us to stand against the often disguised evils of the world–even when we are not directly impacted by poor policies (but I believe we are all affected).  And we certainly could do a lot more.

As a start, churches nationwide need to adopt Moral Mondays and be the church outside of Sunday and one-day-a-week Bible Study.  Churches must be the epicenters again of organizing and strategy.  Explaining to the elderly how the Affordable Care Act affects them; or the possibility of “Stand Your Ground Laws” being expanded; or who the candidates are for upcoming elections are all a form of justice ministry.  I would actually argue with anyone that any ministry that does not seek justice–is no ministry at all, and at best, a weak ministry.  We must not lose sight of the fact that Jesus was not hated on for merely being in the temple.  He was hated on for TEACHING. Oppressors (often those in power) always seek to destroy those who attempt to reveal their schemes and remove their power.  Jesus was an educator, recognizing that the greatest divide between the “haves” and the “have nots” is knowledge.  We can no longer let opportunities to educate people about the world, policies, and politics fall to the wayside. 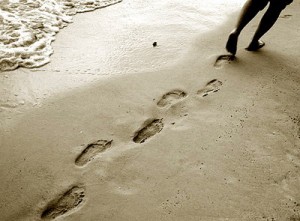 Diary of a FaithPrinter: Verses on Justice
Micah 6:8 “…and what does the Lord require of you but to do justice, and to love kindness, and to walk humbly with your God?”
James 1:27 “Religion that God our Father accepts as pure and faultless is this: to look after orphans and widows in their distress and to keep oneself from being polluted by the world.”
Amos 5:24 “But let justice roll on like a river, righteousness like a never-failing stream!”
Isaiah 1:17 “Learn to do good; seek justice, correct oppression…”
Proverbs 21:15 “When justice is done, it is a joy to the righteous but terror to evildoers.”

More important than the stain-glassed windows, building fund, or the new driveway are the “faithprints” we leave behind.  It it time to pick up our mats…and MARCH!

What faithprint will you leave behind today?

If your church, team, or even self is interested in creating faithprints in your community, please let me know in the comments section.  With faith (and order) all things are possible!

Where Being A Witness Meets Chic Sophistication! Where Every Word Has Profound Meaning. It's all us...ALL REAL! B & F.
View all posts by boldandfab →
This entry was posted in Thursdays with Ify and tagged activist, advocacy, cross, education, faith, faithprints, Jesus, justice, march, minstry, moral mondays, policy, politics, protest, religion, social justice. Bookmark the permalink.