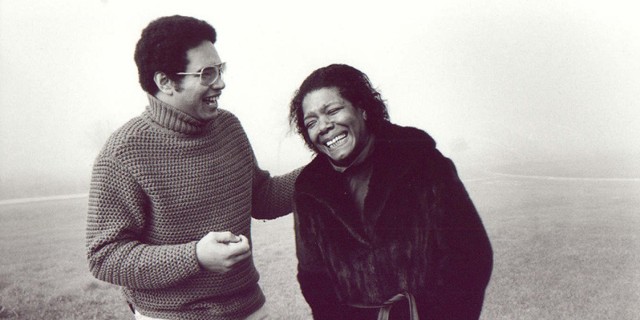 “There is no greater agony than bearing an untold story inside you.”

When I younger for Black History Month my class was given names of African-Americans that were a part of history and I was given the GREAT Maya Angelou. When I heard the news of her passing the first thing that came to my heart was that paper I wrote because boy did I feel GOOD while presenting it in front of my class. I thought about how the FINALE of the paper was me acting out her poem ” Phenomenal Woman” I remembered how BEAUTIFUL I felt as I read each word as MY OWN (I owned that poem).

I also thought about how Ms. Angelou and I had a VERY similar childhood. I can ASSURE you that ONE DAY I will be as BRAVE as her and share (to inspire) my WHOLE STORY; however, for now I’ll run down a few things about her that gave me strength THEN & NOW.

“You may encounter many defeats, but you must not be defeated. In fact, it may be necessary to encounter the defeats, so you can know who you are, what you can rise from, how you can still come out of it.”

The great Ms. Angelou was a product of a broken home due to her parents divorce in 1931. She and her brother were sent to live with their grandparents due to the split. There she faced a racist society; however, her grandmother was still able to PLANT pride and God within her spirit. ~Still I Rise~

I too am a product of a broken home due to my parents divorcing when I was young in addition I too was raised with one sibling (My Older brother whom has gone to be with the Lord). I also faced racial mocks due to being a child born from an interracial marriage (my father is white and my mother is African-American). I spent many days and nights at my grandparents home in southeast DC as my mother transitioned out of her marriage into her own. ~Still I Rise~

During those years Ms. Angelou bounced back and forth between her parents homes due to her not so great relationship with each of them and during that time she was sexually assaulted by a friend of her mothers. Due to the horrific assault she went completely silent for 5 yrs until a woman close to the family whom wouldn’t accept her silence encouraged her to let her spirit move through the horrible events of her past. After those years she became a teenage mother giving birth to her son at the tender age of 16. ~Still I Rise~

I too bounced back and forth throughout my parents transition for many reasons; however, all in Gods plan. I experienced things that my SAVIOR has CARRIED ME THRU (HAND IN HAND) and ONE DAY God will give me the courage to speak about it in an attempt to encourage/uplift someone whom is struggling to move on. I also went through many years of SILENCE WITHIN due to the murder of my ONLY sibling (my two sisters came following his murder) I say WITHIN because I  was held CAPTIVE by hurt, anger, disbelief and a broken heart (I call it my FOGGY YEARS)……BUT MY GOD YESSSSSSSS MY GOD!!!! I too became a teenage mother becoming pregnant at the tender age of 16 and birthing my son while still knee-deep in my high school years. ~Still I Rise~

I thought….WOW it’s IRONIC that she and I have such a SIMILAR past; however, it’s NOT SO IRONIC because I’m SURE many of you can RELATE to OUR STORIES. I’m SURE many of you are saying “I TOO…….” but the MOST important lesson in ALL OF THIS is ~STILL I RISE~……Yes YOU, MYSELF & MS. ANGELOU ~We Rise~.

Today, I want to encourage at least ONE to look at what you may be going THRU, your past, my past and the past of the GREAT Maya Angelou and KNOW with LIFE comes Lessons with TEST comes TESTIMONIES (It’s ALL a part of GODS WONDERFUL PLAN for YOUR LIFE). Having a TRUE UNDERSTANDING that IT ALL MUST HAPPEN (according to HIS WILL) will allow your CLOSING REMARKS to be…….. ~Still I Rise~

Side Note….I ran into a woman I’ve known for many years whom is a Facebook friend of mine. She said “I see you on FB and said to myself CAN SHE GET MORE HAPPIER?” I laughed and said “ON PURPOSE I have JOY WITHIN” (If she ONLY KNEW MY STORY & HOW MERCIFUL & GOOD GOD HAS BEEN TO SEE ME THRU) ALL I CAN DO IS SMILE.

“You may encounter many defeats, but you must not be defeated. In fact, it may be necessary to encounter the defeats, so you can know who you are, what you can rise from, how you can still come out of it.”

Be     Understanding His Plan

Where Being A Witness Meets Chic Sophistication! Where Every Word Has Profound Meaning. It's all us...ALL REAL! B & F.
View all posts by boldandfab →
This entry was posted in Fridays with Monisha. Bookmark the permalink.