5 Tips For Embracing Your New Season

Posted on September 1, 2014 by boldandfab

I’ve missed you guys and gals, two weeks too long…

But in those two weeks my life has changed dramatically since we last convened. I’ve moved to NY, started a new job, and I’ve officially begun my new season. As excited and humbled as I still am about the biggest come up of my life, I’ve also just been really nervous since I stepped foot on that train 11 days ago. I was questioning my ability to adapt to a new city, doubting my ability to really grasp and succeed at a new job, and feeling overall pressure from all the questions coming my way from family and friends (granted I know all of their questions have been rooted in love). Two weeks in, and I’m not gonna lie y’all, New York and Google have kicked my butt lol. I will NEVER understand why someone would voluntarily choose to live in a place where they have to FIGHT to even breathe…yes I know I’m being dramatic, but let’s just say NY is way different than Baltimore and will likely never be home for me. My body hurts from being pushed and cramped on my 60 minute train ride everyday and at this very moment I’m being oppressed by heat and humidity. #HOTTTT …As for my new job, I literally walked into a world where everyone speaks a different language; one where I don’t know nothin’ about nothin’. I never in a million years imagined me in a tech space, but here I am, frustrated and almost drowning. So what now?

Well, even in the midst of me trying to keep my head above water, there have been some really awesome moments in this process that I can’t leave out. I’ve gotten the chance to spend quality time with my little sister who lives here. I’ve made some new friends already (which is a big deal for introverted me lol). I’ve visited a new church. I’ve seen a play on broadway. I’ve eaten some really great food. What’s my point? The glass is ALWAYS half full, but its up to you to CHOOSE to see it that way. Are you being brought into a new season too? Well here are my 5 tips in how to truly embrace your new season (in no particular order):

What did I leave out? Feel free to share!!

Oh, and I promise to get you guys and gals a pic with my Noogler hat on lol, but until then… 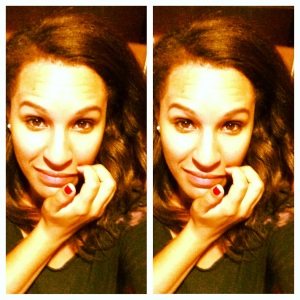 Where Being A Witness Meets Chic Sophistication! Where Every Word Has Profound Meaning. It's all us...ALL REAL! B & F.
View all posts by boldandfab →
This entry was posted in April Mondays. Bookmark the permalink.

1 Response to 5 Tips For Embracing Your New Season