GET OVER IT ALREADY!!!

As a women who feels that I’m not living my life in a box, it really annoys me when categories and personality descriptions are made to generalize all women. You know what I mean right? “Women are nurturers.” “Women are natural born communicators, unlike their male counterparts.” “Women are compassionate.” The list goes on. What about this one… “Women are emotional creatures!” That one really used to make the feminist side of my blood boil. But check it, the older I get and the more life experience I receive, the more I tend to agree with these generalizations; especially the one about being emotional. It’s not a bad thing. God created man & woman…wired very differently, on purpose with purpose. The bad thing is allowing those emotions to rule over you, alter your character, or ultimately, run you crazy!!!

Ladies, tell the truth…SHAME THE DEVIL. Let’s keep it 1-hunnit (if you’re slang challenged, my apologies in advance, lol). How many of you are holding a grudge with someone as of today? Ok…don’t want to admit it? Well let me rephrase/ask another way: What’s the longest you’ve ever held a grudge with someone? Have you ever noticed men’s uncanny ability to forgive and forget. I mean literally. A few years ago, I witnessed a scuffle between two guys, friends for years. They got into a heated discussion, which turned into a heated debate, which turned into a heated argument, which turned into a heated physical altercation. It was a hot mess!! They were separated and taken by their friends into different areas of the house. It was intense, so I know I wasn’t the only one thinking, ‘There goes that friendship.’  About an hour later, they were back in the same room. About an hour after that, they had dapped-it-up and had this ‘unspoken forgiveness’ that seemed to transcend a verbal apology. The night went on, like nothing ever happened. Fun times for the evening.

I’m sorry, but I have ZERO HOPE that could’ve/would’ve played out the same way if they were females. Myself included. Over the years, I have become very forgiving (praise God!). But I’m not even talking about forgiveness…not in it’s purest form anyway. I’m talking surface forgiveness. You’ve long moved passed that argument, disagreement, or issue. Technically, you’re ‘over it’, BUT you can’t be the first to look like you are!! As if that ‘white-flag’ is the demise of your life!!!!!

To take it a step further, you guys have buried the hatchet but the air still remains thick; there is still a side-eye or in this age of social networking…the sub-tweeting, & implied post references.

Ladies, we’ve got to do better!

Hebrews 12:15 — See to it that no one fails to obtain the grace of God; that no “root of bitterness” springs up and causes trouble, and by it many become defiled.

Sure, there are instances where we are clear that God is speaking to us to leave certain relationships behind for our greater good. 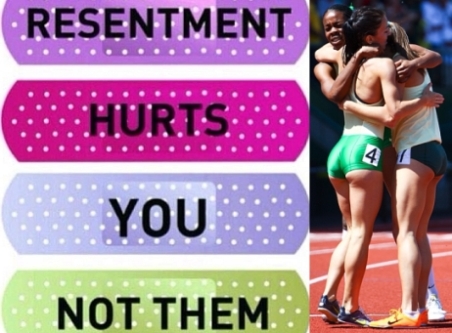 However, I’m talking about releasing hard feelings that are connected with our slick, prideful ways and passing it off as a God thing; with no intention to fix it because ‘we just don’t feel like it’ {pouts lips, stomps off like a big baby}. We know in our hearts when we’re holding a grudge with someone, even when we don’t admit it to others. I learned a lot about myself the day I witnessed that guy fight. I learned that how quickly you’re willing to move past their offense or repair the word wound(s), says a lot about about who is in control of us. If seeing how long you can go without speaking first, is your gauge of being the winner…YOU LOSE!!! As believers, we are supposed to be looked upon as the examples of how to operate in grace, but often times, I see the unsaved making greater strides in this area.

“I am learning how to figuratively take a hit in relational conflict. I understand that I will never champion in the area of emotional maturity if I avoid the opportunities the Lord affords me to grow in.” ~Monte Duggar

Where Being A Witness Meets Chic Sophistication! Where Every Word Has Profound Meaning. It's all us...ALL REAL! B & F.
View all posts by boldandfab →
This entry was posted in Wednesdays with iNDIGO and tagged christianity, Forgiveness, grace, grudges, indigo inspires, indigoinspires, maturity, Monte Duggar, reconciliation, Resentment. Bookmark the permalink.

6 Responses to GET OVER IT ALREADY!!!